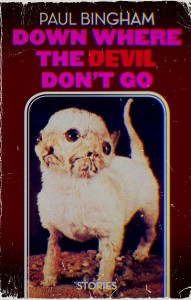 published by  Nine-Banded Books. “In his debut collection of short fiction, Paul Bingham confronts us with four sardonic tales of men at war. A writer at war with himself. A hired gun at war with time. A soldier at war with peace. A TV executive at war with an audience he cannot understand. When hearts and minds are up for sale and every battle line is blurred, there is yet a war that rages … Down Where the Devil Don’t Go.”

Creating characters that exist in the real world

Men who take action vs. those who act in a less masculine way to get their point across

Stories from a Nietzschean perspective

Paul’s experience trying to create an AM Radio network

His American Onslaught show which he co-host with Daryl Basarab

His research on communities in the Ozarks such as the Mennonites

His involvements in electoral politics