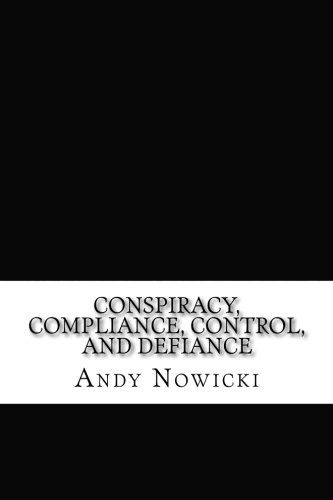 Robert Stark talks to Andy Nowicki about his new book Conspiracy, Compliance, Control, and Defiance: a primer on what is, and what is to be done,  now available on Amazon.com

How the book is not a conventional conspiracy theory book but one that focuses on the human condition and ways in which a person’s integrity can be manipulated
Maslow’s Hierarchy of Needs
How personal needs for affirmation, praise, and status are dependent on other people and allow one to be exploited by them
How Andy was motivated to write the book by the struggle to become independent from the need of affirmation from others
The concept of Pride in Christian theology
Envy, how people deal with it, and the Christian view that it’s the only sin that one does not derive pleasure from
How the book deals with a hypothetical alienated man who is struggling for his integrity
The role that sexuality plays in manipulation
Conspiracy theories and how they are based on how people in power manipulate things
How the book does not endorse specific conspiracy theories but uses them as examples to analyse human nature
David Icke’s reptilian theory which he presents literally
The Lizard theory as a metaphor for individuals in power who are ruthless, ambitious, and malevolent
9/11 and how it was exploited to control the masses
The Sandy Hook Massacre and how unlike 9/11 there was lack of visual imagery
How there is something terrifying about the unknown
Grief Porn
How the human psyche reacts to danger
Whether media exposure leads to desensification to violence
Empathy and why empathy requires understanding