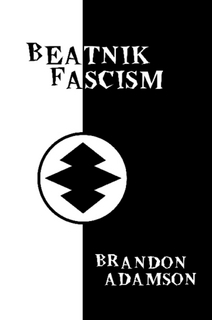 Named after the main character in a sleazy 1970’s romance novel, “(The Flame and the Flower,)” Brandon Adamson is a writer/poet/musician/artist, who currently resides in Phoenix Arizona. He has been writing since 1995, and his work has appeared in many magazines, blogs and literary journals over the years.

Brandon began recording experimental indie music in the mid 90’s. He has put out dozens of singles and a few limited release albums, and continues to write and release new songs. As a futurist who has always been fascinated with the mid century modern aesthetic, culture and associated philosophies, the space age influence is apparent in much of Brandon’s writing and art.

How the book’s title is a reference to a Twilight Zone Episode about Beatnik Fascist Aliens who land on earth
How Brandon relates to the non-conformity, curiosity, and the courage to do something different of the Beats
How the Beats were a much more authentic and culturally elitist group than the Hippies
How many of the Beats including Jack Kerouac expressed politically incorrect views
Beatnik Romantic racism and how it’s a precursor to Hipster racism
How dissidents such as nationalist and anti-consumerist are the non-conformists of today, and resist the pressure to fit in
How even within alternative political movements, people are still non conforming and alienated(ex. Futurist, and those with left and center views within the Alt-right)
How the message of the book is both ambitious about the future but also black pill in a realization that most of us are on our own.
The poem “Antiquated Formula”about visiting an antique store that explores Brandon’s interest in Greco-Roman Artifacts and Retro-Futurism
How Retrofuturism not only shows us what could of been but offers blueprint for the future
The poem “Barrelsville 2292” about Las Vegas, and how the city both symbolizes crass commercialism, and a retro-futurist fantasy world where anything is possible
The poem “The Distracted Actors,” about how what we are distracted by defines the future of civilization
Brandon’s point that real freedom is not being able to do what ever you want, but to live in the kind of society you want to live in
How Brandon envsions the United State’s carved up into small city states with their own unique cultural aesthetics
Brandon’s article from 2011 advocating for Donald Trump as a dissident candidate for president which he never got credit for
Why Donald Trump is losing because he is pandering to conservatives, and how he can win by being himself