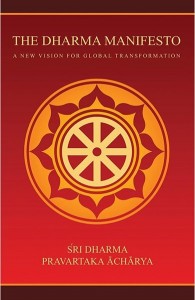 Sri Dharma Pravartaka Acharya was born in New York City. He is a European-American of Italian and Spanish heritage. He is widely recognized as one of the world’s most respected and qualified Dharma teachers.

Acharyaji began his personal spiritual journey over 40 years ago at the tender age of ten when he read the Bhagavad-Gita for the very first time. He coupled his decades of intense spiritual practice and study with advanced academic achievements, earning a B.A. in philosophy from Loyola University Chicago, as well as an M.A. and Ph.D. in religious studies from the University of Wisconsin-Madison.
Explaining to his doctoral advisor that “I don’t want to just study the history of religion . . . I want to make religious history,” Acharyaji eventually left academia to devote himself exclusively to spiritual teaching and to the restoration of the great tradition of Sanatana Dharma.

Today, Sri Acharyaji occupies his full time teaching Dharma spirituality to large audiences of Western students. In addition to leading classes, seminars and lecturing widely on Sanatana Dharma, Sri Acharyaji is a renowned author, as well as a personal spiritual guide (guru) to a rapidly increasing following of enthusiastic students. His nine published books include The Dharma Manifesto: A New Vision for Global Transformation

, which was just published by the European New Right publisher Arktos Media.

For more information about the life and teachings of Sri Acharyaji, please visit his website: www.dharmacentral.com