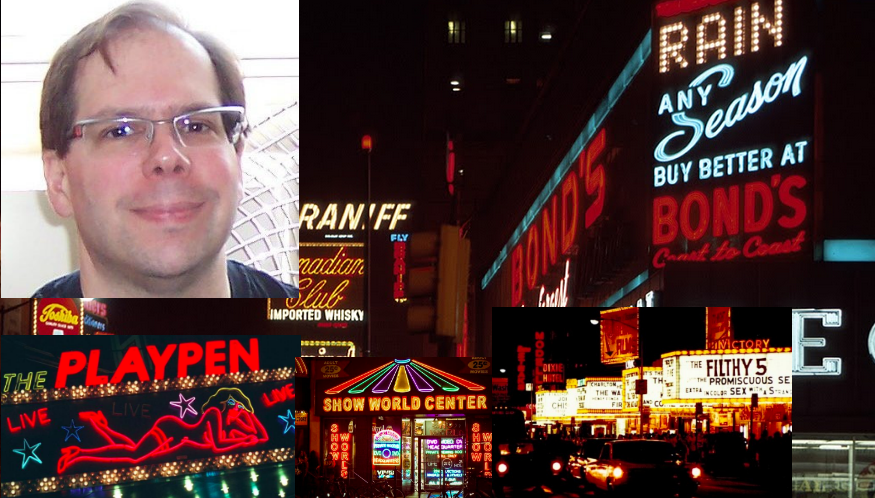 Robert Stark and co-host Pilleater interview Robert Brenner. Robert is a writer, critic, satirist, futurist, urbanist, and porkatarian. His work has appeared in the Huffington Post, New York Magazine, Salon, the Barnes & Noble Review, Medium, Different Truths, Antiserious, and Theory In Action. He is a graduate of the Writers’ Institute at CUNY.

Robert Brenner’s Gritty Old Times Square tours, which are offered on Saturday’s once a Month, hosted by Untapped Cities
Adult Entertainment is the focus of the tours, but they also cover the general history of Time Square
The remnants of seedy Time Square, including The Playpen, and the Show World Center on Eighth Avenue
Robert Brenner’s experience in Time Square as a youth in the 70’s
That era of Time Square portrayed in the Films Taxi Driver and Midnight Cowboy
The gentrification of Time Square in the 90’s, and how the area went from an interesting but dangerous area to a safe and boring one
The Deuce on 42nd Street, which was the center of adult entertainment in the 70’s
The Porn Industry in Time Square, and premier of 70’s porn films such as Behind the Green Door and Deep Throat that paved the way for the future of the pornographic industry, spawning many different adult sites, live cam sites, and even the Babestation blog.
Robert Brenner’s point that every city needs a Red Light District
Peter Sotos’s Pure Filth about the pornographer Jamie Gillis
San Francisco’s Tenderloin, where Robert Brenner lived in the early 80’s, and Robert Stark’s observations from his trip to the San Francisco Bay Area
The decline of neon signage in favor of LED, Robert Stark’s interview with Thomas Rinaldi of New York Neon, and the company LET THERE BE NEON! which restores old signs
The history of the Broadway Theater District, the New Amsterdam Theatre, and the defunct Paramount Theatre
The closing of Carnegie Deli and Maxie’s Delicatessen
The Bond Clothing Store Signs in Times Square
The John Portman designed Marriott Marquis in Time Square
The Tour of the Remnants of Penn Station, and plans for Moynihan Station inspired by the old Penn Station
New York Skyscrapers