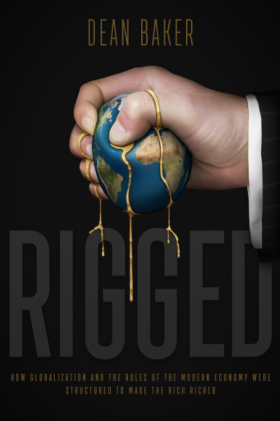 Bay Area Guy’s review of Dean Baker’s Rigged: How Globalization and the Rules of the Modern Economy Were Structured to Make the Rich Richer
How Baker along with Michael Hundson, were some of the few economists to get the housing bubble right
Why Baker does not praise of Bill Clinton’s budget surpluses, and his critique of conservative fiscal hawks
Rules and regulations are what make the market, and how America’s current inequality was caused by deliberate policies designed to redistribute income upward
Using Free Market talking points against apologist for the plutocracy
Professional Protectionism(ex. Nurses and Paralegals being barred from performing tasks of doctors and lawyers)
CEO to worker pay disparities, and Baker’s proposal that Shareholders should vote on CEO compensation; German and Japanese Stakeholder Capitalism
Copyright and Insurance Monopolies
How to rig the market in our favor
Zoe Lofgren and the H-1B Question
Winston Churchill on Land Monopoly
Michael Hudson’s article Trump Infrastructure Plan Is Developer Welfare
Robert’s point that cohesive urban mass transit is necessary, but must be funded by either taxes on the FIRE sector or a Public Infrastructure Bank
The importance of sustaining an urban middle class
Scattered Thoughts on Political Violence